categories
login
It's not essential, or compulsory, but you may find it convenient to register with us on completion of your first order. We will store your details securely, and use them to fill out the order form for future purchases. It will save you a bit of time! Go to 'Register' for more information.

GB QV: 13 March 1841: The Second Issue of Postage Stamps.
The 2d value with white lines added. Two new plates, Plates 3 and 4, were prepared for this issue, Plate 3 being put to press on 27 February 1841, and Plate 4 not until early December 1849. The Maltese Cross cancellation appears almost exclusively on Plate 3, being very rare on Plate 4, and the 1844 barred numeral cancellations are more common on both plates. Guide-lines, both horizontal and vertical, are frequent on Plate 3, and absent on Plate 4. Certain check-letters are distinctive to only one plate (e.g. the square-footed 'J' of Plate 3), and are useful in distinguishing the two plates. It has also been noted that the deeper shades are more often seen on early printings, and the paler shades on later printings. Pale Blue is not often seen cancelled with Maltese Cross, and Deep Full Blue is rather scarce on Plate 4. 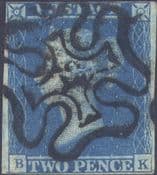 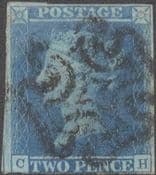 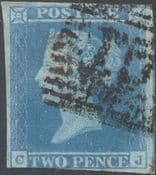 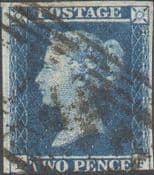 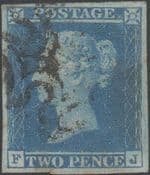 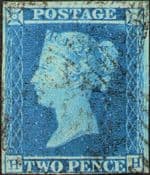 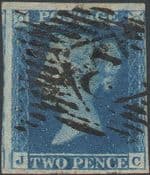